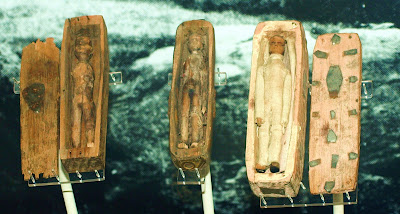 In The Falls Ian Rankin weaves the story about the Author's Seat Coffins into DI Rebus' case. A coffin is found near a missing young woman's home and Rebus digs around the idea that there might be some kind of connection between the missing girl and the coffins.

The historical record claims that in 1836 five young boys, hunting for rabbits on Arthur's seat found 17 miniature coffins hidden inside a cave. They were arranged under slates on three tiers, two tiers of eight and one solitary coffin on the top. Each coffin, only four inches in length contained a little wooden figure, expertly carved with painted black boots and custom made clothes. The ones on the bottom tier were more deteriorated suggesting that they had been placed there at different times, the ones on top being the most recent.

The reason the coffins were placed there and who might have been responsible has never been discovered and remains a mystery. We had a bit of a challenge finding them in the museum but we tracked them down. Eight of the coffins remain today and they are housed in the National Museum of Scotland.

The Museum is a stone's throw from Edinburgh City Apartments, Greyfriars flat.
Posted by .Gord Hunter at 9:15 AM