Walking the Wall Day One 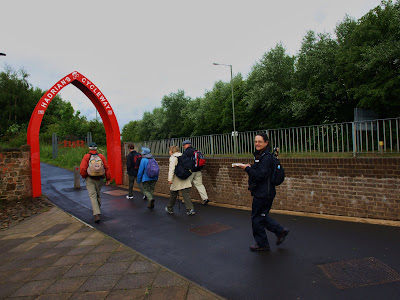 I know you have to read these posts backwards but did I say 'A piece of cake'? Well perhaps not but we did survive and we arrived at the White Swan Pub more than an hour before the shuttle arrived to bring us to our hotel. Pretty good I thought.

No one told us that the pub was at the top of the Tyne River Valley. A tough, long climb after a 24 km trek. I have to tell you that beer tasted great.

We headed out at 8:15 in the morning, first walking above the River Tyne through what was first an old industrial area then eventually the path moved down to the river's edge.

It was a good path, mostly paved and wide enough that we didn't have to worry too much about cyclists. Eventually we arrived at downtown Newcastle and we walked across the famous millennium bridge to the Baltic Centre of the Arts for a coffee and a rest.

The riverside centre of town is lovely, there are so many bridges. I forgot how many but there are traffic bridges, foot bridges, metro bridges and train bridges. They hold a Sunday market along the path and there were scores of fishermen trying their luck at catching codlins, bass and flounder. I am not sure I'd eat anything coming out of that river but edible or not, there were a lot of fishermen.

Eventually we moved our way through the city, through suburbs and back into agricultural land and after a long climb we ended our day at the Heddon on the Wall
Posted by .Gord Hunter at 10:19 AM