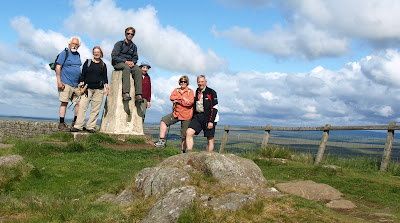 We got started a bit later this morning as a result of the fact that The Twice Brewed Hotel was a little later with breakfast than we expected. Our B&B which was the Vallum Lodge, about 100 metres down the road from Twice Brewed, was very good and made arrangements for the three of us staying there to eat early. They were great, I think those of us who got sent down to the overflow spot, got the best deal.

The day started with a series of Crags bringing us to the highest point of land. The scenery was spectacular. The wall is very present through this section of the walk and wonderfully so. The remains of turrets and milecastles perched on the edge of those towering crags has to make each of us wonder what it must have been like for those Roman soldiers, manning those towers day after day. Winter must have been very tough.

The landscape is rugged and the weather unforgiving. We had a taste of that unpredictable British weather this afternoon. We thought we’d get a great sunny day but as we moved through this high ground a thunderstorm developed very quickly. In fact, we got soaked in a series of rain showers and ended the day in a rain and hail storm.

One of the highlights of the afternoon was that we were entertained by the RAF jet fighters training through the hills. Pretty amazing flying.
Posted by .Gord Hunter at 6:57 AM