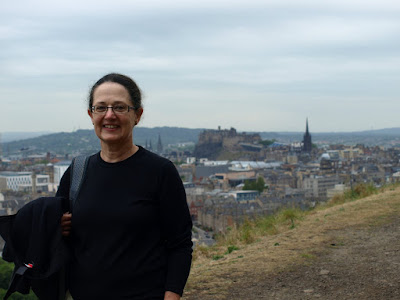 Although the castle does predominate the city landscape you are always aware of the Salisbury Craigs and Arthur's seat. They are the remains 350 million year old volcano. The castle site on an old vent of that same geological feature..

Yesterday we walked up Radical Road which starts up the side of the craigs beginning near the Scottish Parliament buildings. It was built up the side of the Salisbury Craigs by unemployed weavers as a job creation project 1n the 1820's.

It was a tough climb particularly at the start but what a view. We felt pretty good at our ability to walk up the steep trail until we were passed by a couple of locals who were running up.

It is all part of Holyrood Park established in the 1100's as a royal hunting ground.
Posted by .Gord Hunter at 10:39 PM