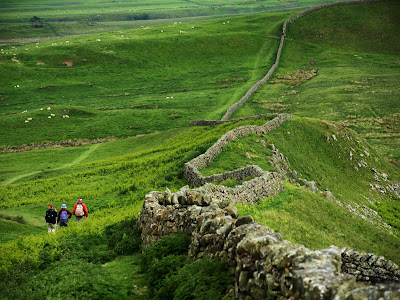 The first couple of nights we stayed at the same B&B/Pub in Newburn which was a bit odd because although we walked a good distance each day, we were backtracked by minivan each night to our accommodations.

On day three we started the day at Brunton Tower, a small section of preserved wall along with the remains of a tower. The towers housed two to four soldiers and there were a couple of towers in between each mile castle which was bigger and housed a dozen or more soldiers.

We then walked down through a pretty little village called Collorford and spend an hour or so looking over the ruin of a cavalry fort called Chester’s. I am not sure where the name comes from.

With a start like that I thought we’d spend most of the day walking through pastoral farm land. An easy day. I kind of miscalculated or perhaps I should have looked at the contours on the map a little closer.

It was through farmland but, up hill for the first few miles. But, bit by bit we began to see more and more evidence of the wall. In places the vallum was very present and in others the vallum the wall and the ditch was very clear.

As we made progress through the early afternoon the first of the crags started getting closer. The first Sewingshields Craig was a tough climb but it clearly was through some of the most beautiful country I have ever seen. To the south, miles and miles of rolling hills and pasture, to our north a huge cliff dropped down several hundred feet. To the west the undulating hills continued before us. We walked the ridge.

After a very long day we arrived at our hotel/pub and downed that cold welcome beer.

That evening there was pub trivia in the pub but I am finding, after a twenty km walk over rough terrain, I was ready to pack in by 9:30.
Posted by .Gord Hunter at 8:27 AM