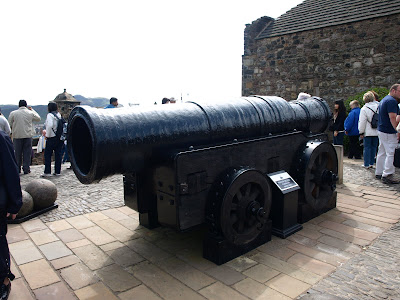 We spent the rest of the morning walking around Edinburgh Castle. It is a pretty amazing place built right into the hill which is really a volcanic plug somehow never scraped away by the glaciers. It is so steeped in history that I hardly would know where to start. The evidence of first structure built here goes back to the 11th century. It is an predominant, imposing presence which can be seen all over the city. Unfortunately the entrance way is marred by huge bleachers set up so the tourists can watch the military tattoo. Not being a big fan of that kind of military pageantry, from my perspective it only serves to block the view of the castle from those walking up the street to visit.

The picture is of a cannon nicknamed Mons Meg. like many things here the reason for the name is obscured by time. It is not your "run of the mill" cannon however. It was built in 1445 and weighs almost 8 tons. It was designed to fire stone cannon balls weighing 400 lb two miles or more. No mean feat. It could only be fired half a dozen times a day or so because of the tremendous heat generated by the explosion.

It was last fired in 1681 on a ceremonial occasion. The barrel exploded apparently. No word of the fate of soldiers who were firing the gun at the time.

The castle still serves a military purpose and makes for a fascinating visit on a great many fronts. If you visit don't miss the dog cemetery, the prisoner of war exhibit or the Scottish Crown Jewels.
Posted by .Gord Hunter at 3:10 PM