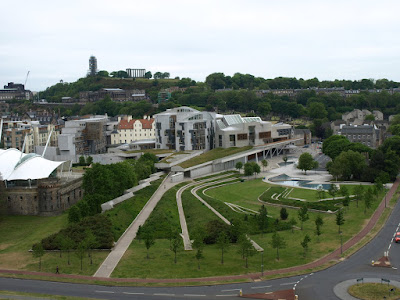 Shelley and I had a rare treat late Wednesday afternoon when Tricia Marwick a Member of the Scottish Parliament gave us a tour of the five amazing buildings which make up the Scottish Parliament. I met Tricia when she spoke to the Fair Vote Canada AGM about electoral reform in Scotland. She invited me to get in contact with her when we came to Edinburgh and we met late afternoon. She gave us a tour most of the public never get the opportunity to see.

The controversial structure was designed by Catalan architect Enric Miralles and officially opened in 2004, three years late and millions of pounds over budget. Still the subject of some controversy it is a stunningly magnificent, if eccentric structure. Although from the outside it consists of five separate buildings, one dating back to the 17th century, on the inside the transitions from one to the other are seamless.

The space is quite wonderful and we had a great tour guide in Tricia who knows the building inside out, quirks and all. We were quite taken with it.