From Banks to Carlisle 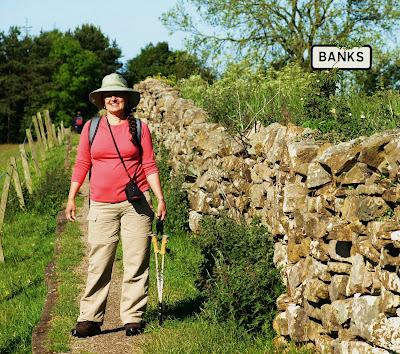 We started the day just before the small village of Banks. After taking the obligatory Banks photos we moved on through the pasture land. In fact most of the day was spent walking from farm to farm, across field after field, dodging the occasional bull, (they looked more interested in the cows than us) we went down country lanes twisting and turning through the English countryside. There is little evidence of the wall through this section and the further we walked the less frequent sightings became. Unlike the more harsh and rugged highlands, this land has seen significant development for a very long time.

The more people, the more the wall was plundered for it’s stone. In one case a whole priory was build, using Roman stone taken from the wall. The scenery is pastoral as opposed to spectacular but it is all very pretty.

On the outskirts of Carlisle we came across sheep being sheared. It was quite impressive, they grouped the sheep with their young lambs so they wouldn’t run. They herded the sheep through a chute and did them one at a time. What a racket though, lambs bleating, looking for their mothers, mother sheep baaing, looking for their lambs. When that group of mother sheep were all done and released, they let the lambs all go. They all paired up quickly then relaxed a bit

We walked 26 km today, though most of the terrain was fairly gentle, I got my first blister. We are staying at a Carlisle B&B tonight

Tomorrow morning we are walking the last leg of this hike. The Carlisle to the Irish Sea section is about 22 km of flat ground, originally salt marsh. We walk to Bowness on Solloway, get our certificates and have a celebratory beer, which is how we have been ending every day come to think of it, We’ll have dinner with the rest of the crew tomorrow night then head our separate ways.
Posted by .Gord Hunter at 7:03 AM