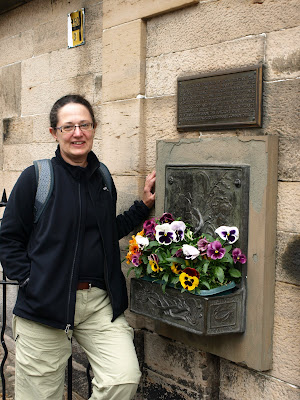 It took us quite some time to find the Witches Memorial. Every time we walked up or down the Royal Mile we looked for it to no avail. This afternoon Shelley spotted it on the side of a building up near the castle.

It was a fountain originally but now there are flowers planted in it. The memorial recognizes the fact that there were over 300 witches burned in Edinburgh. The last one in 1722.

If someone accused you of being a witch it was a bit of a no win situation. The accused were often bound with their thumbs tied to their ankles and the accused would be dunked in a pond. If you died the perpetrators were comforted by the fact that you were innocent and would go to heaven. If not, you were obviously a witch, so they burned you at the stake.

Practicing this this type of tough justice was finally abolished in 1736.
Posted by .Gord Hunter at 8:20 AM