What a Great City 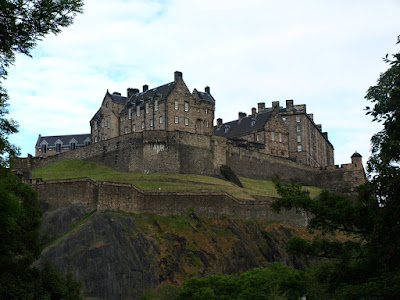 We walked quite a bit at home before we left, trying to make sure we could handle anything this trip threw at us. We did it primarily because of Hadrian's Wall which starts in a couple of days. I don't think we ever could have imagined how much we'd walk here in Edinburgh.

This town is really made for walking and where we are staying, a few feet off the Royal Mile, is ideal. Everything it seems is within a reasonable stroll. Even so I feel like we have barely scratched the surface. There is so much here to see and do.

The town in divided into old and new, new meaning built between the end of the eighteenth century and the early 19th century. The old town, built along a ridge of volcanic rock along each side of the Royal Mile which stretches from the castle to Holyrood Palace, the Queen's residence here. (We can't visit it however since Prince Charles we are told is in residence although there is certainly no sign of him in the shops) The new town is laid out to the North of the old one, kind of, down the hill and across the railway tracks. It is all very geometric and Georgian and a lovely contrast to the winding cobblestone, different levels, steep stairs and narrow closes the old town offers..

The castle can be seen from almost everywhere. Even in a modern city it predominates, in the early years it must have been such an omnipresent reminder of the undercurrents of unrest which so often swirled around Scotland.
Posted by .Gord Hunter at 10:05 PM