Edinburgh is a Walking Around Kind of Town 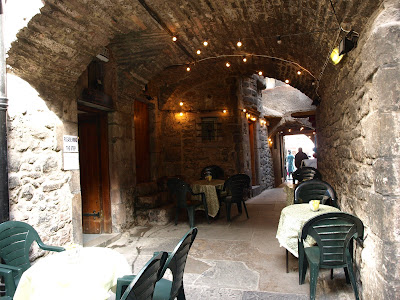 Edinburgh is a town made for walking. Most things you might want to see are within a reasonable walking distance. That would make it easy if Edinburgh was flat. Believe me, it isn’t

We started our day with a walk along Cowgate then walked up the hill to the Royal Mile and along to Deacon Brodie’s Close where we had some good strong coffee and some toast. The restaurant is located in what they claim was where William Brodie, the deacon’s son lived, William was a respected councilor and cabinet maker who often plied his craft in peoples homes. The only problem was that he duplicated the keys of the houses he was working on and went back in the evening and helped himself to their belongings. He basically was a reno-man by day, burglar by night. He was caught and hung in 1788, ironically on a scaffold of his own design.

They claim that the image of Brodie and his two personas gave Robert Lewis Stevenson nightmares as a child and subsequently served as the inspiration for his Dr. Jekyll and Mr. Hyde.
Posted by .Gord Hunter at 10:28 PM