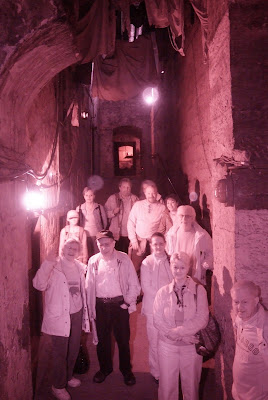 Ian Rankin fans will remember that in the novel Mortal Causes a body is found in Mary King's Close and John Rebus has to go down under the city to investigate the murder.

Mary Kings Close is in a section of the city, built over and long forgotten and under the City Chambers.

Ian Rankin said he had gone on a tour through these long forgotten narrow passageways and houses and was struck with the idea of a body being found there. It is after all, a pretty creepy place.

In the 1600's the this area was full of narrow streets running down the steep side of the hill from Edinburgh's main street, the Royal Mile. It was a maze of tenements some seven stories high. People lived in very close quarters along with their livestock. There was no sewage system, people lived crammed into small rooms used a bucket which was dumped into the street and everything ran down hill to a putrid lake at the bottom where, from time to time, they drowned witches.

In 1645 the plague hit Edinburgh, probably brought from Europe by rats on ships docking in Leith. The plague spread through these crowded quarters like a wild fire. In 18 months it had killed a substantial part of Scotland's population.

Mary King's Close is now a tourist attraction. Interesting and kind of fun, in a macabre sort of way even if the guides probably play a bit loose and free with historical fact
Posted by .Gord Hunter at 1:20 PM