Its a dogs life 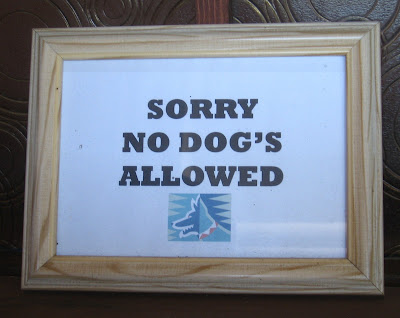 At the eastern end of Hadrian's Wall, there is a pub called the King's Arms.

On the front door of this pub, there is a sign: "Sorry/No dog's/allowed."

Imagine! The poor dogs! After a long walk along the wall, they reach the only pub and can't bring in their... what?

Exactly which possessions of the dogs are not allowed within the confines of this final pub?

We were co-hiking with two young men and their dogs (we met them a few times), and when we reached the pub, both men were relaxing outside, backs against the outside wall, legs sprawled out into the narrow road, dogs sitting politely beside them.

We greeted them and congratulated them on completing the journey -- they had huge packs with camping gear AND dog food! -- but it never occurred to us to ask: "Which of dog's possessions were not allowed into this pub?
Posted by .Gord Hunter at 10:22 AM