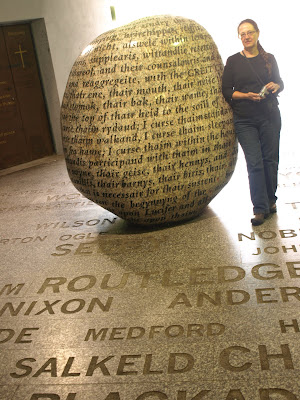 All the time we have been here in England we have been in an area has seen its fair share of turmoil. The Scots and the English were in a constant state of warfare for almost 1000 years. During that period of time there was also the problem of the border reivers. They were kind of private raiders and plunderers who moved across the area burning farms, stealing cattle and creating general mayhem,

The Archbishop of Glasgow, Davin Dunbar was quite upset about the state of affairs and, insisted that a curse on the reivers be read from the pulpit in every parish.

In Carlisle there is a stone with a part of the curse engraved in it and the reiver names are carved into the floor. The sculptor was from a reiver family. Part of the curse is below.

It goes on for 1100 words or more. A bit excessive. Some Carlisle city aldermen think the stone has brought the city bad luck and want it removed.

Both Shelley and I think the Archbishop went a bit too far. perhaps in explains why both of us have problems with authority figures.
Posted by .Gord Hunter at 9:52 AM