Down the Road to Penrith 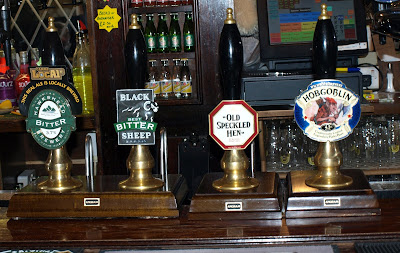 We challanged the BBC weather forecast and won again. It was a great day despite their gloomy predictions. Shelley and I took the bus to Penrith where we catch our train tomorrow. It is about 16 miles east of Keswick.

I like the Brit's attitude about buses. They seem to run everywhere and seniors ride for free after 9:30 in the morning and all day on weekends. So when it gets boring, they just hop on a bus and ride to another town, have cuppa tea and ride back.

Just in case you aren't about what is acceptable they post rules on the bus.
No smoking, no smelly food, no hot, fizzy or alcoholic drinks
Using a personal stereo or mobile phone? Keep them quiet.
If the bus is full give your seat up to someone who might need it more than you
Don't put your feet on the seats
Keep dogs on leash and off the seats
Any questions?

Penrith is, or was the market town in the area.It is much different from Keswick. It is very much a working town an interesting maze of narrow streets. The original builders used a lot of red sandstone which is a real contrast to the slate used in Keswick.

We had lunch in the Gloucester Arms Pub. It is an old "Elizabethan lesser town residence" dating back to about 1580. Some of the original wood paneling remains intact, the ceiling are low and the fireplaces you can see were originally large enough to cook in a side of beef in.

There is a claim that the Duke of Gloucester, who became Richard the third, stayed there at some point but it is dubious claim at best. The Duke had a castle a few blocks away. It seems unlikely he stay in a local house considering the options.

The pub was very traditional with four bitter taps together ot the bar. As well as the usual selections of Smithwicks, Bottingtons and the lagers they had Hawkshead, Black Sheep, Old Speckled Hen and Hobgoblin bitters.
Posted by .Gord Hunter at 7:38 AM